Before the Victorian Era bees were kept in straw skeps. Skeps are essentially upturned straw baskets under which bees form their naturally curvy honey comb. In this system when the beekeeper collects honey the swarm of bees are killed or made homeless in the process. This means that each year the beekeeper needs to start again by collecting a new wild swarm.

The Victorian Era saw the rise of the amateur naturalist. Bees were cultivated by middle class gentlemen not for honey but science. The most famous of these amateur beekeepers was Charles Darwin who kept at hive in the garden at Down House. Darwin marshalled his children into an army of laboratory assistants in order to track the flight paths of Bumble Bees. It is postulated that keeping bees helped Darwin formulate his theories on evolution.

Nor ought we to marvel if all the contrivances in nature be not, as far as we can judge, absolutely perfect, as in the case even of the human eye; or if some of them be abhorrent to our ideas of fitness. We need not marvel at the sting of the bee, when used against an enemy, causing the bee’s own death; at drones being produced in such great numbers for one single act, and being then slaughtered by their sterile sisters; at the astonishing waste of pollen by our fir-trees; at the instinctive hatred of the queen-bee for her own fertile daughters. Charles Darwin, The Origin of Species 1859. 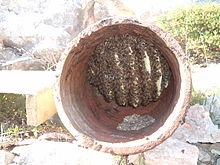 Bees in a baked clay jar in Malta

Mud hives are still used in Egypt. These are long cylinders made from a mixture of unbaked mud, straw, and dung.

Clay tiles were the customary homes of domesticated bees in the eastern end of the Mediterranean. Long cylinders of baked clay were used in ancient Egypt, the Middle East and to some extent in Greece, Italy and Malta. They sometimes were used singly, but more often stacked in rows to provide some shade, at least for those not on top. Keepers would smoke one end to drive the bees to the other end while they harvested honey. 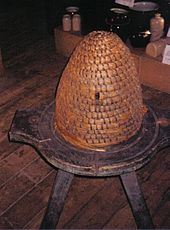 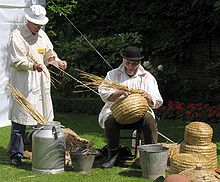 Skeps, which are baskets placed open-end-down, have been used for about 2000 years. Initially they were made from wicker plastered with mud and dung but from the Middle Ages they were made of straw. In northern and western Europe, skeps were made of coils of grass or straw. In its simplest form, there is a single entrance at the bottom of the skep. Again, there is no internal structure provided for the bees and the colony must produce its own honeycomb, which is attached to the inside of the skep.

Skeps have two disadvantages: beekeepers cannot inspect the comb for diseases and pests, and honey removal is not easy- often resulting in the destruction of the entire colony. To get the honey beekeepers either drove the bees out of the skep or, by the use of a bottom extension called an eke or a top extension called a cap, sought to create comb with just honey in it. Quite often the bees were just killed, sometimes using lighted sulfur, to allow the honeycomb to be removed. Skeps could also be squeezed in a vise to extract the honey. As of 1998, most US states prohibited the use of skeps.

Later skep designs included a smaller woven basket (cap) on top over a small hole in the main skep. This cap acted as a crude super, allowing the harvesting of some honey with less destruction of brood and bees. In England such an extension piece consisting of a ring of about 4 or 5 coils of straw placed below a straw beehive to give extra room for brood rearing was called an eke, imp or nadir. An eke was used to give just a bit of extra room, or to “eke” some more space, a nadir is a larger extension used when a full storey was needed beneath.

A person who made such woven beehives was called a “skepper”, a surname that still exists in western countries. In England the thickness of the coil of straw was controlled using a ring of leather or piece of cows horn called a “girth” and the coils of straw could be sewn together using strips of briar. Likenesses of skeps can be found in paintings, carvings and old manuscripts. The skep is often used on signs as an indication of industry (“the busy bee”).

In the late 18th century, more complex skeps appeared which had wooden tops with holes in them over which glass jars were placed. The comb was built in the glass jars which made it commercially attractive.