Chalkbrood is a mycosis (a disease caused by a fungus), which affects bee brood.

It is an infectious disease of the larvae, and is caused by a fungus called “Ascosphaera apis”. It looks like pieces of chalk in the comb and is chalky-white initially, but some become dark blue-grey or almost black as in the picture to the right.

Spores of the fungus are present on the bees, comb and hive parts. They require climatic changes to be present in the hive before they can develop. A drop in temperature combined with high Carbon Dioxide (CO2) levels allow the spores to germinate and it is likely that protein deficiency in the bees allows them to grow.

After germination the vegetative growths (hyphae) of the fungus invade the larval tissues and kill them after they have been capped.

The fungus then produces fruiting bodies containing many spores to spread the infection. It is believed that there needs to be 2 strains present before reproduction can occur.

The dead larvae become chalky white and fluffy and swell to fit the cell. They then shrink and harden to become ‘mummies’

Signs in the colony

Adult bees will tear down the cappings of the dead larvae to reveal the chalky white mummies. These lie along the length of the cell and often take on the hexagonal pattern.

The bees remove the mummies from the hive and they can often be seen on the hive floor and outside the hive.

The mummies are usually found scattered throughout the brood nest and can reach high numbers.

The disease often appears in a peak in the late spring/early summer as the colony expands and the brood outnumber the bees. This is because there are insufficient bees to maintain the temperature and control the ventilation (CO2 build-up).

Care needs to be taken to differentiate chalk brood from mouldy pollen but this is usually concentrated around the periphery of the brood nest and tends to be a different colour.

This is done by the typical appearance of the larvae

Chalk brood spores are sticky and will attach to the comb and bees as they remove the infected larvae.

They are also readily transmitted by robbing/drifting bees. The beekeeper can also spread the disease on hive tools and comb transfer.

The disease is considered to be endemic in Britain but levels of infection will vary from colony to colony. The beekeeper has to aim to keep the infection level down.

There are no fungicides available for the larvae and spores on the bees and combs are unreachable.

Combs can be fumigated with acetic acid but heavily affected comb should be destroyed.

Viable spores will still be present on the bees and may be present in honey stores.

In severe cases re-queening from a disease free colony is recommended.

Because of the temperature/ventilation aspect of the disease it is more likely to occur in small colonies or nuclei. Ensuring that there are sufficient bees will reduce the risk. 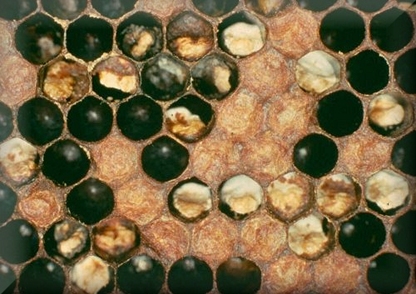 The disease mostly occurs in the spring and worsens in the summer, generally disappearing in the autumn when the queen slows down laying. It causes the death and mummification of sealed brood (see the picture to the left) and seriously weakens the colony, affecting honey output and the general health and well-being of your bees. Fortunately, it only very rarely kills a colony.

The larvae in the comb ingest the spores of the fungus with their food, allowing the fungus to get into the intestine of the larvae. The young infected larvae do not usually show signs of disease, but they usually die within two days of being sealed in their cells or die as prepupae. The spread of chalkbrood within the colony is very limited, and the fungus only seems to thrive on honeybee larvae and does not appear to affect the adult bees. 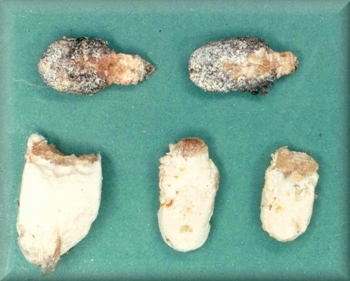 The fungus grows best when the brood is chilled, so keeping a constant temperature within the hive is a major factor that can help to keep infection at bay. The spread is usually due to the accumulation of mummies (the white chalky remnants of infected bee larvae) and the bees being unable to remove the dead bodies from the hive fast enough.

It is mostly spread between colonies through the activity of the beekeeper, on clothing and tools – another reason why good sanitary practise and careful beekeeping husbandry is essential. The spores can remain dormant for more than 3 years anywhere in the colony, including the wax foundation and frames, this means that the disease can return in previously infected colonies.

Chalkbrood is not just a problem in the UK, but is present on nearly all continents. The only place chalkbrood is not a problem is in Antarctica, and that’s only because there are no bees there! Some beekeepers are lucky enough that their colonies never suffer from chalkbrood, but it can be a harsh and serious problem if one of your colonies does.

There are several causes that can make a hive more likely to suffer with a chalkbrood epidemic. These include what is called “chilled brood”, which is caused by exposing the brood to low temperatures for too long when checking the hive. New beekeepers can be particularly prone to this as they inevitably have to hold the frames outside the hive for a bit longer while they are learning how to properly check the bees by looking for the Queen, searching for Queen cells and other essential beekeeping tasks.

Another factor is stress, which can be caused by checking the brood too often and causing frequent major disruptions to the colony.

As chalkbrood is caused by a fungus, the humidity can also be a major concern. Keeping the hive in a damp location, which is always shaded and lacks ventilation is a certain way to get chalkbrood in your hive.

Additionally, the bees are extremely sensitive to what they consume and the use of antibiotics for preventative purposes, or poor-quality artificial feed can increase your chances of having chalkbrood. Even an alkaline pH of the nectar can make it more likely that chalkbrood will occur.

How to prevent Chalkbrood

Chalkbrood can be prevented by burning all contaminated comb and wooden frames as shown in the picture to the right. You should also clean your tools and wash all of your suits, gloves and other equipment regularly. You should also ensure that you are using a high-quality artificial feed which is free from mould spores, and ensure that they have an acid pH. 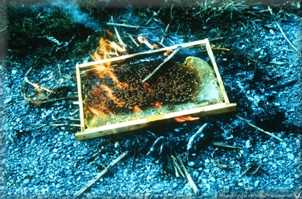 The use of a ventilated floor can also help to reduce both humidity and condensation. It may also be worth considering moving your hive to a location with more sunlight and less moisture.

Some people also consider replacing the queen, as she may be transferring the fungus throughout the hive.

Sometimes no method of prevention is sufficient to remove a chalkbrood problem. If this is the case, then you need to apply a treatment to the hive to ensure that the fungus is killed. There are various treatments available and each has it’s own benefits and downfalls. The currently available treatment options that have been proven to work are shown below.

Thymol is very harmful if it comes into contact with the skin and is also corrosive. It should not be used during the honey flow and also slows down the Queen’s laying of eggs.

Thymol can be mixed with sugar syrup for feeding and stops the syrup from fermenting and going mouldy. 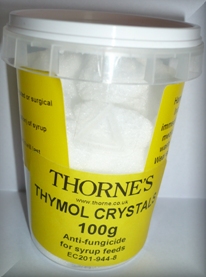 Vitafeed Green is based on essential oils and contains walnut, thyme, and wild marjoram. You can add it to syrup or fondant, and can add it at anytime of the year. It is a bio-stimulant that has been used for colony strengthening and has been shown to reduce chalkbrood. The only draw-back is during the honey flow you should not feed the bees with syrup or fondant. 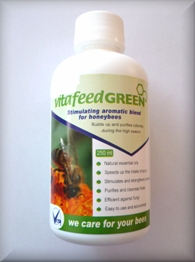 Beevital Chalkbrood is composed of organic amino acids, essential oils and propolis. You can apply it twice a year, during spring and autumn using either an easy-use sachet or a bottle.

You can also use it again at anytime if the fungus re-appears – something which commonly happens with chalkbrood.

For the best results, it is suggested that you use any treatment in conjunction with other preventative measures such as a ventilated floor and the other options discussed previously.

We wish you the best of luck in clearing chalkbrood from your hive, and remember it is exceptionally important to keep these incredible creatures healthy and well – for both your and their sake!