Bee stings are a hazard of being a bee-keeper. Some keepers think it is good for you and operate without gloves, it’s believed you become immune and the bee venom can be helpful towards certain ailments. This is obviously personal choice, but if you get stung it kills the bee as it rips off the rear of the abdomen of the bee’s body.

Attached to the sting is a muscle, the bee flies off leaving the poison sack and muscle attached to the victim. The muscle continues to pump venom into its victim. The best way to remove the sting is NOT to pinch it with finger and thumb, this squeezes all the poison in the venom sack into the victim. Instead scratch the sting out with a fingernail or sharp implement as soon as possible. The sting sack gives off an odour, this attracts other bees that think the bee is in danger.

The anatomy of a honeybeeIf a bee gets caught up in your hair it will most probably end up stinging you because it will panic as it gets entangled and unable to get out. The best method if this happens is to slap it and squash it against your head quickly before it stings. This does not always work and could result in you getting stung anyway, but it is apparently the most efficient way.

If you have been stung and the sting has been removed, quickly use a bee sting antidote. This just helps to alleviate the pain and reduce the swelling a little. A cold compress is also very good for reducing swelling.

Some people may be susceptible to Anaphylactic Shock from stings. If they show signs and symptoms of shock, like light headiness, difficulty breathing and general distress, call for medical assistance immediately. It is also advantageous to place them in the recovery position and ensure their airway is clear. 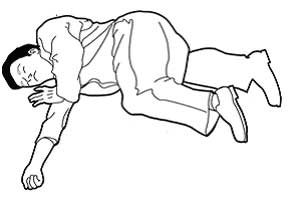 As a member of the insect class (Insecta), honey bees share with other insects the following characteristics. Honey bees are segmented in nearly all their body parts: three segments of thorax, six visible segments of abdomen (the other three are modified into the sting, legs and antenna are also segmented. Honey bees have an exoskeleton, which is rigid and covered with layers of wax, but have no internal bones like vertebrates do. 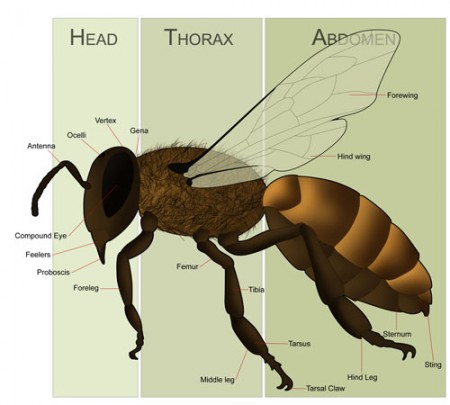 The main component of exoskeleton is chitin which is a polymer of glucose and can support a lot of weight with very little material. The wax layers protect bees from desiccation (losing water). The advantage of chitin-containing exoskeleton also prevents bees from growing continually, instead, they must shed their skins periodically during larval stages, and stay the same size during the adult stage. Bees also have an open circulatory system, meaning that they do not have veins or arteries, but rather all their internal organ are bathed in a liquid called ‘hemolymph’ (a mix of blood and lymphatic fluid). Bees breathe through a complex structure of network of tracheas and air sacs. Oxygen is vacuumed into the body through openings on each segment (spiracles) by the expansion of the air sacs, then the spiracles are closed and air sacs are compressed to force the air into smaller tracheas, which become smaller and smaller until individual tubules reach individual cells. In the following I will discuss the important structures on and inside the honey bee body.