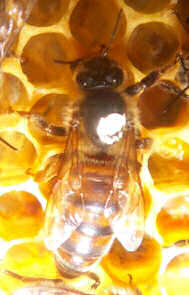 The Queen is the only sexually productive female in the colony and thus is the mother of all drones, workers, and future queens. Her capacity for laying eggs is outstanding; her daily output often exceeds 2000 eggs, the weight of which is equivalent to that of her own body.

Anatomically, the queen is strikingly different from the drones and workers. Her body is long, with a much larger abdomen than a worker bee. Her mandibles, or jaws, contain sharp cutting teeth, whereas her offspring have toothless jaws. The queen bee lacks the working tools possessed by worker bees, such as pollen baskets, beeswax-secreting glands, and a well-developed honey sac.

There is normally only one Queen in the colony and once mated (in the first three weeks of her life) she stays inside the hive to lay eggs (except when she is swarming). She is genetically identical to workers but more developed due to the large consumption of Royal Jelly when she was in the larval stages.

The Queen can live up to five years, but is of very little value to the colony after three years because her laying capacity reduces with age. She is constantly fed and groomed by the worker bees and produces a pheromone called “Queen substance” that acts as a scent which informs the colony that a viable Queen is present. If a Queen is removed or lost from the colony workers will notice in less than thirty minutes and become very agitated and prepare to rear new Queens.

The Queen has a non-barbed, curved sting used only to dispose of rival Queens within the colony. 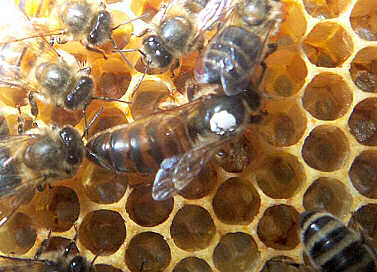 A Queen bee (marked white) with workers on honeycomb

The Queen’s development and ‘rise to power’ is detailed below, in easy to follow steps.

1. Bees construct up to 20 wax queen cells, which are acorn like and point downwards.
2. The queen lays fertilised eggs in each queen cell.
3. The young (nurse) bees feed the young queen larvae with a rich creamy food called Royal Jelly, and extend the cell downwards until it is about 25mm in length.
4. Nine days after laying, the first queen cell is sealed with a layer of wax capping.
5. This is the time when a large swarm (called a prime swarm) of bees leaves the hive led by the older bees. The old queen has been starved of food to make her lighter and able to fly. The older bees can then get the old queen to join the swarm.
6. Eight days later the first virgin queen leaves her cell. Two things can now occur, either the first virgin queen leads a smaller swarm from the hive (called a cast) or she locates the other queen cells and kills her sisters by stinging through the wax wall of their cells.
7. About one week later the young queen takes her first flight to orientate to her new surroundings.
8. The queen will shortly take several mating flights in which she will mate with up to 20 male bees called drones.
9. Three days later the mated queen will begin to lay fertilised eggs.
10. This queen will stay with the colony until at least the following year when she too may lead a prime swarm. 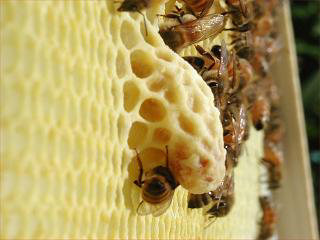