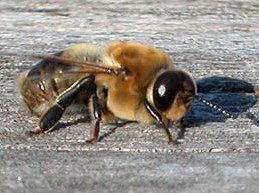 Drones are male honeybees. Drones have no pollen baskets or wax glands and cannot secrete royal jelly. They are stingless and defenceless. Their single function is to mate with new queens. After mating, which always takes place in the open air, a drone dies immediately.

Early investigations of the mating habits of the honeybee concluded that a queen mates only once in her life. Recent scientific studies, however, have established that she usually mates with six or more drones in the course of a few days. The motile sperm of the drones find their way into a small, sack-like organ, called the spermatheca, in the queen’s abdomen. The sperm remain viable in this sack throughout the life of the queen.

Drones are prevalent in colonies of bees in the spring and summer months. As winter approaches, they are driven out of the nests or hives by the workers and left to perish. When a brood nest is large, the presence of drones helps to maintain heat and it’s believed that a colony is more content with drones.