Why do Bees swarm?

Swarming is the term used to describe the normal method by which honey bee colonies reproduce. Through swarming a group of bees seperate from their single, large honey bee colony and settle elsewhere to form a second colony. Although swarming is usually an undesirable aspect of beekeeping it can be used by the beekeeper to expand his or her stock of colonies.

For a bee colony to propagate, it is forced to produce another queen, as a colony usually only has one queen bee present at any one time. This normally takes place when the colony is at its largest and the weather is reasonable enough for the swarm to depart and find another home.

Looking for a home

The preparation for swarming starts early in the year. Scout bees, who are workers searching their area for food, water and pollen sources are also looking for new homes for the colony. From late February onwards they can be seen exploring abandoned feral hives such as cracks in walls, rotten trees and unused man-made hives for their suitability.

These potential homes have to fulfil several criteria for the colony. Firstly, they must afford the colony adequate shelter from the elements. They must also be of a big enough size for the colony to occupy, taking into account future growth in numbers and the addition of collected stores. The entrance must be small enough for the colony to defend from predators, and for the same reason should also be raised well off the ground.

There is ample evidence that bees also pick new homes with smells and odours that are pleasant or familiar to them. For instance, swarms are frequently found to have taken up residence in chimneys, where the odour of smoke may be similar to the inside of a hive after smoking has been conducted by a beekeeper.

Swarms often pick older, vacated homes, for example empty hives, hollow trees and walls that previously housed feral bees. Bees are also attracted to smells such as lemon balm, which can be used as an attractant by the beekeeper. It is these preferences, or combinations of these preferences that enable the beekeeper to utilise ‘swarm traps’ or ‘bait boxes’ to catch his or her own swarms or other errant swarms.

It should be noted that if a swarm has moved into a chimney, old tree or wall before, there is a good possibility that another swarm will try in the future, sometimes that same week! For this reason, if you have encountered an unwanted colony of bees moving into an area of your property it may be worth asking a local beekeeper for advice, and perhaps allow a swarm trap to be situated in a suitable area near to the original site. If the bees find this swarm trap more desirable than the other site they will move into this instead, where they can be taken away to the beekeeper’s apiary. Better still, you could learn how to become a beekeeper and catch the swarm to start off your own colony!

After 2-3 years the queen bee’s production of queen substance (a type of pheromone) in the hive reduces, usually as a result of the ageing process, although this is dependant on the strain of bee and the conditions it is kept in. It is the reduction in this queen substance that causes the worker bees to commence building queen cells inside the brood chamber. The brood chamber may contain numerous queen cells and it is into these that the queen then lays an egg into. These eggs are then fed and cared for with an enriched diet (consisting mostly of royal jelly) that produces larvae that will develop over the next two weeks into a queen.

Prior to the new queens emerging from their cells, the old queen gathers together a retinue of workers, normally half of the hive workers which can be in the region of 25,000 bees. These bees then eat as much honey as they can carry before leaving for their new home sometime around midday as a ‘prime swarm’. Within 20 minutes the swarm should have landed on a tree branch or a post in the vicinity of the apiary. The cluster, which can be quite large, has the queen in its centre and is at this stage normally, but not always, quite placid in its behaviour, probably due to the fact that most of the bees are stuffed full of honey and they have no home to defend. Scout bees fly off to confirm that the potential new home is still available, and establish the best route to it.

The swarm may stay in this area for 1-2 hours, or sometimes for a day. Some have even stayed in this initial position, exposed to the weather until they have all died several days later. Hopefully, the swarm will find its way into the desired new home or be captured by a beekeeper and will continue to thrive.

If the cast swarm emerges, leaving the queen cells intact, new queens will go on hatching and making the choice of either flying with half of the remaining workers until there are nearly none left, or killing their potential competitors and remaining in the original hive with the remaining workers.

The ‘Swarm Trap’ or ‘Bait Hive’ 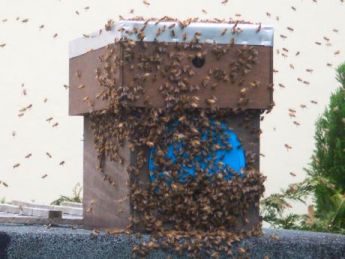 This equipment is used to lure swarms to occupy it rather than other homes. It is in fact a small scale hive, containing frames with foundation both drawn and undrawn. The entrance is small and therefore defensible, and it should ideally be positioned at least 6-10 feet above ground level with the entrance facing away from the prevailing weather and towards the sun. It will probably have beeen ‘scorched’ by a blowtorch inside to kill any parasites on a seasonal basis, and this creates the odour of charred wood. The foundation in the frames will give off the smell of wax and an old, smelly, drawn frame is usually included for maximum effect.

To increase the chance of catching a swarm, several products are available which can be added, all of which claim to attract bees by odour. Some products are based on artificial pheromones and others using a spray of extract of lemon balm, a bee favourite. 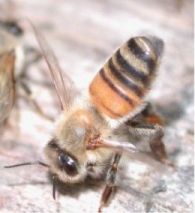 When the swarm of honey bees arrive at their new home, the workers will perform a ritual known as fanning, in order to entice the other workers into their new home. In this process, the workers raise their abdomen into the air and wiggle it – the bees look very bizarre when doing it!

By raising their abdomen into the air, the workers expose a white-tip called a Nasonov gland. This gland releases pheromones into the air and the other workers detect the pheromone and interpret this as a message saying “This is our new home – hurry up and move in!!!”. So the process of fanning is the worker bees method of speeding up the move into their new hive.

This unique instinctive behaviour can be seen in the video half-way up this page, particularly from 7 minutes into the video. Simply click on the video to play!